Every Wednesday night from 9 to 11pm, Allenians gather to share a cup of coffee. Allen Café located on the 3rd floor of Dormitory G at Yonsei University International Campus has been spreading warmth to the outside community ever since its initial opening in 2017. Allen Café sells various kinds of beverages – fruit smoothies, green tea latte, coffee, and all kinds of tea – and fosters a place where RC students can come together to share a conversation or to play board games with each other. The profit raised from its sales is donated to Children’s Cancer Foundation. Allen Café is one of the programs provided by Allen House for the purpose of Residential College education.

Residential College is a prestigious education model that maximizes learning effects through creative community education that integrates academics and living. The world’s oldest RC education systems were introduced in the 1920s at Oxford and Cambridge universities in United Kingdom and at Harvard and Yale universities in the United States.

Yonsei University too, started its RC education since 2011. In pursuit of a traditional residential college model of prestigious universities around the world, Yonsei partly introduced its RC education system in 2011. Starting from 2014, all first year students were required to live in Songdo international campus for one year to receive RC education. For this reason, the RC Education Center was established in Songdo under the undergraduate university.

Yonsei University aims to fulfill full-time education and creative education through RC education with the goal of "Cultivating a creative global leader who practices the spirit of sharing and serving". Its further goal is to instill capacity for cultural diversity, leadership of service and challenge spirit in first year students.

Among eleven dormitory houses that operate under the RC education system, Allen House has its own distinctive characteristics. As the house is named after Horace Newton Allen, the first American missionary who served in Korea, its slogan is “rise by lifting others”. Under such slogan, Allen House has been running Allen Café since 2017. As the program has settled down, RC students also started to take part in making beverages with RAs. For over two years, Allen Café has gained a reputation as a signature program of Allen House.

Recently, a special program was added to the café. The program called “donation by a hand” was first designed this year and then started collaboration with the café. Drawing from the fact that the café has only been serving drinks, a new RA in Allen House devised a program where RC students can make dessert by themselves and sell those at the café so that the profit earned can also be donated to the Children’s Cancer Foundation. The significance of this program lies upon the fact that what students make with their own hands can be transformed into what can be donated. This is why the program is named “donation by a hand”.

On May 1st, fifteen students got together to make strawberry-cream donuts and chocolate-cream s’mores. Students pasted whipping cream on donuts decorating strawberries on the top and made s’mores using marshmallows and chocolate cream. Although students had to make whipping cream manually which could have turned out to be arduous, students stayed engaged believing that it would bring more meanings to their donation. The fruits of their efforts enabled students at the café to relish more various menus while chatting with their friends or blending in with each other playing board games. 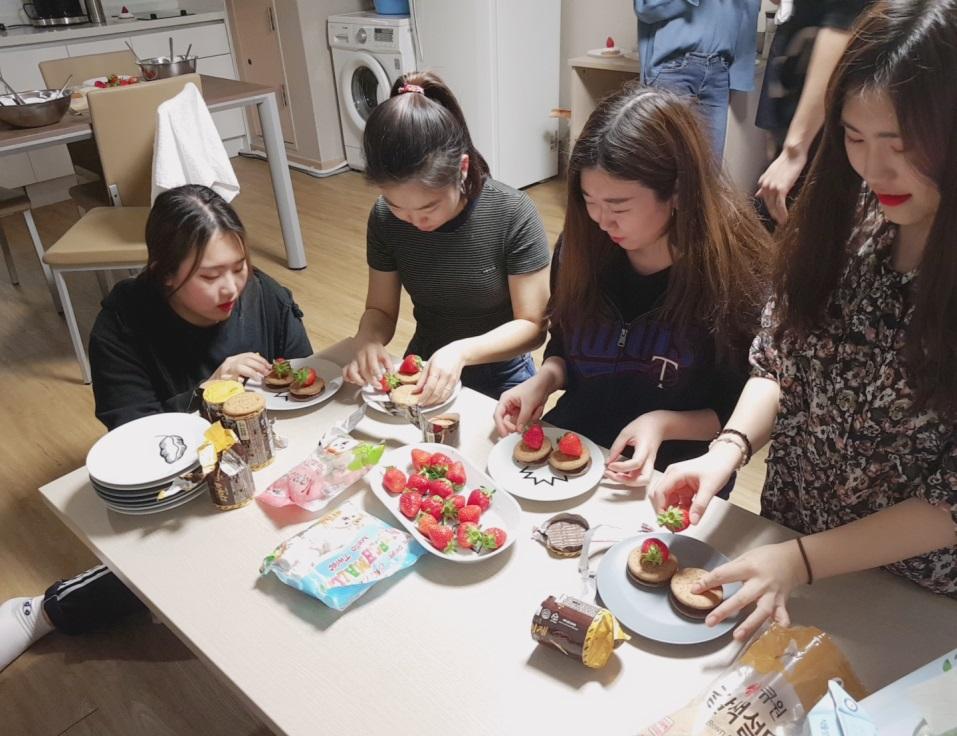 Students decorating strawberries on the top of s’mores

Allen Café is an example of successful RC education. It lives up to the goal of RC program in the sense that it not only practices the spirit of sharing and serving but also ends up being a way for participating students to help themselves. The café will continue to sell lattes along with volunteer spirits of Allen House and RC education as a whole for those in needs.