One’s major is one of the most prominent labels that students use to describe themselves. It is the field that one specializes in during their time at university. Yet sometimes, one major is not enough—many students seek to broaden their horizons by trying out different majors through the joint major systems. Now, Yonsei University is providing another option, a ‘micromajor,’ for those who are willing to learn more.

Micromajor is a policy which allows undergraduates to explore different academic fields and receive a certification of completion with relatively fewer requirements. Unlike a double major or a minor which require 36 credits and 21 credits respectively, a micromajor only requires 12 credits to obtain.

Yonsei University implemented the micromajor system this year, starting from the first semester of 2021. The purpose of this new academic policy is to “cultivate the ability to use knowledge from different fields of study” and “providing opportunities to encounter other majors with fewer burdens.” Students who have fulfilled certain requirements—12 credits in a single semester including compulsory courses in the curriculum—can apply for a micromajor certification at the end of the term on Yonsei’s online portal service. Once applied and approved, the accreditation will be listed on the grade transcript of that particular semester. Applicants must have their first majors declared, and those who have already received their bachelor’s degree cannot apply.

Not all departments are open to micromajors. According to the Office of Academic Affairs, 13 micromajors are now available in 11 departments. Currently one can take up to two micromajors among the following majors; English Linguistics, English and American Critical and Cultural Theory, Cultural Studies of the Modern Germany, Psychological Science, Astronomy and Space Sciences, Smart Construction Information, Sustainable Infrastructure Systems, Systems Biology, Biochemistry, Biotechnology, Human Resource Development, Cognitive Science, and Startup Insight. 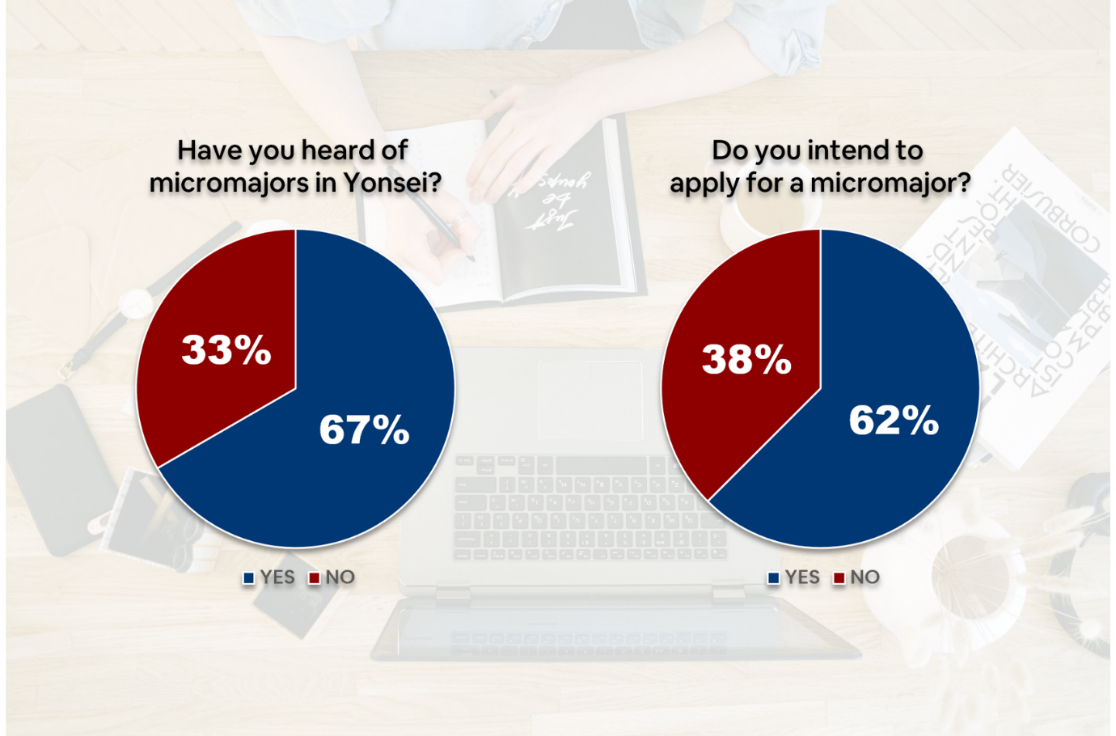 While the idea of easily experiencing different majors sounds promising, reactions of Yonsei students varied. The UIC Scribe randomly asked 24 Yonsei University students through an online survey their opinion on micromajors. More than half of the respondents said they had previously heard of the system. After being given more information on micromajors and asked whether they would apply for it, more than 60% said they would not. 45% of those who responded negatively pointed out that micromajors “seem to lack professionality,” given that the requirements are too easy to achieve and the certifications are not actual degrees that are widely recognized. 22% of those who responded negatively said that there were “not enough options,” while 9% said that there was “not enough information on the policy.” One student in Underwood International College (UIC) stated that getting a joint major certificate is relatively easy in UIC, which makes the micromajor option less appealing.

Students who welcomed the new system, on the other hand, cited the fact that the process was “easy and burdenless (37%)” as the main reason for applying. Some students said that micromajors could be a stepping-stone for building one’s career, or a “taster” before applying for a minor or a joint major. One student showed anticipation in learning ‘Human Resources (HR)’ as a micromajor in college, mentioning that it would be useful for applying for HR positions. Two students responded that it might be hard for juniors and seniors to apply for micromajors, even though the policy is open to all undergraduates. Nevertheless, they both agreed that the concept of micromajors was highly interesting.

Yonsei University is not the first to adopt the “lightweight” studies policy. Some of the major Korean Universities such as Hanyang and Inha have been utilizing micromajors and have had promising results. While micromajors are expected to enhance interdisciplinary studies and enrich learning opportunities, whether they will ultimately be successful at Yonsei remains to be seen.